It happened in a flash: A blade. A father’s rage-fueled lunge. A child’s shrill screams. A mother fleeing in panic. In an instant, what appeared to be a routine police call became a life-and-death emergency. Fortunately, a Blue & You Foundation grant for a Stop the Bleeding kit helped a Jonesboro officer save a child’s life.

On April 29, 2018, Patrolmen Tyler Wilson and Blaine Middlecoff of the Jonesboro Police Department were dispatched to stand by as a mother picked up her 2-year-old daughter from the girl’s father. In most cases, these calls are relatively uneventful, and for several minutes, this one appeared no different.

“They went into this really narrow hallway,” Middlecoff recalled. “So I hung back around the corner. At that point, it seemed like it was going to be pretty routine.”

From routine to urgent – in one motion

As the mother picked up the child in the darkened hallway and turned to leave, the father produced a knife. He lifted it above his head and wildly thrust it at the woman’s back. His frenzied aim, however, was off.

Patrolman Wilson immediately drew his weapon and went into arrest mode. He shouted commands to the attacker as the mother fled from the house with her terrified child. Then Wilson cuffed the father without incident.

The shaken mother rushed past Middlecoff. He heard a panicked shout from outside – “The baby got stabbed!” – and soon realized events had gone terribly awry. He saw “a heavy, pulsating flow of blood” coming from the little girl’s right arm. (Police later determined that the blade had gone through the toddler’s right forearm and into the back of her mother’s left arm.) 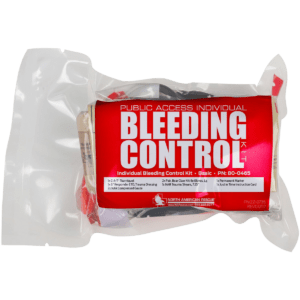 Immediately, Middlecoff’s mind flashed to his “go bag” in his patrol car. A grant from Arkansas Blue Cross and Blue Shield’s Blue & You Foundation for a Healthier Arkansas allowed the Jonesboro Police Department to equip each patrol car with first-responder kits and had trained officers to use them. Middlecoff also had prior experience with trauma tourniquets in the military.

“When I saw how she was bleeding, I knew something had to be done as fast as possible,” Middlecoff said. “I knew about the CAT (combat application tourniquet) type of kits, so I was pretty comfortable with how to use it.”

Using the hood of his car as a makeshift trauma table, Middlecoff tore into the go bag to grab the medical supplies he needed. He applied a tourniquet to the upper portion of the little girl’s injured arm and pressed gauze to the wound site.  While working to stop the bleeding, he comforted and reassured the distraught child as best he could until emergency medical services (EMS) personnel arrived a few minutes later.

“I don’t know if she could even understand me, but I told her, ‘I know this is going to hurt, and you’re not going to like it, but it’s going to be OK,’ and I just kept trying to talk to her to keep her as calm as I could,” Middlecoff said.

After being stabilized at St. Bernards Medical Center in Jonesboro, the child was flown in an air ambulance to Le Bonheur Children’s Hospital in Memphis. While at Le Bonheur, a surgeon was able to repair the brachial artery bleed. Miraculously, she was discharged the next day – but very much alive and well.

Doctors later said that, because of the nature and location of the wound, if the equipment and supplies had not been on the scene and used as Middlecoff had been trained, the chances of the child’s survival likely would have been slim to none – even with a fast response time by EMS personnel.

“When it was all over, it began to sink in as to what just happened,” Middlecoff said. “When you’re in the middle of it, you really don’t have time to think about it.”

Years in the making

The incredibly positive outcome was set in motion years before. The city of Jonesboro had applied for grants from the Blue & You Foundation in the past and received funds for requests ranging from exercise stations to emergency defibrillators. As the next grant submission deadline neared, Jonesboro Mayor Harold Perrin urged Spencer Guinn, M.D., founder of the local nonprofit Stop the Bleeding Foundation, to apply for a grant.  Dr. Guinn agreed and applied for a $149,334 grant to purchase 600 Stop the Bleeding kits (which cost about $100 each). The grant would pay to train 600 northeast Arkansas police officers and firefighters to provide lifesaving care using the kits.

A match for the mission

When Patrick O’Sullivan, executive director of the Blue & You Foundation, saw the request come across his desk, he thought it was a natural fit. The Blue & You Foundation was established in 2001 to promote better health in Arkansas. In its 17 years, it has awarded grants (in all of Arkansas’ 75 counties) for more than 1,500 health-improvement programs administered by nonprofit or governmental organizations. These awards now total more than $33 million.

“This request was a great match for our focus on health, safety and wellness,” O’Sullivan said. “At its core, this request was about a type of early intervention that can have a profoundly positive impact for people in urgent need. I believe that is the reason our Board of Directors so readily recognized its merits and approved it. And this case is the perfect illustration of what a great investment it turned out to be.”

Because of the success and effectiveness of the program, the Blue & You Foundation funded a second-year grant of $149,973 to the Stop the Bleeding Foundation in 2019. The gift will provide kits and training to an additional 600 first responders in northeast and north-central Arkansas.