“How can you know that something is possible for you if you’ve never seen anybody who looks like you do it?”

That thought was shared by Ahniya Williamson, an Arkansas State University freshman. She is one of six African-American students selected for a new program to assist minority pre-med students. The A-State program received a grant from the Blue & You Foundation for a Healthier Arkansas, a charitable foundation established and funded by Arkansas Blue Cross and Blue Shield.

“When we looked at data at successfully getting into medical school by our students, there is a racial discrepancy,” says Lynn Boyd, Ph.D., dean of the College of Sciences and Mathematics at A-State. “We weren’t getting a lot of Black and Hispanic students in medical school. This was true of the data for the nation and Arkansas.” 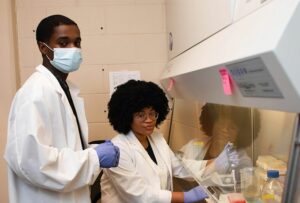 When Boyd and her department successfully applied for the Blue & You Foundation grant, she explained that the goal was “to help these students cross the finish line” with their undergraduate studies. She made a strong case for increasing the diversity of their pre-med student population.

“This inequity in the medical field has many repercussions. It exacerbates the shortage of physicians working in under-served communities. Thus, this under-representation of Black and brown doctors contributes to inequities in patient care. Lack of diversity in the medical profession exists in Arkansas. The Arkansas Minority Health Commission (2018) found a troubling lack of diversity in every medical profession they examined (e.g., physician, optometrists, dentists, general physicians).”

Though she’s only in her first year at college, Williamson wants to go on to medical school and become a gynecologist. She sees the need in her community.

“From my personal experience with women of the African-American community, and minority communities in general, many do not see a gynecologist regularly or know a female African-American gynecologist,” said Williamson. “Feeling comfortable with the doctor that deals with a section of your body that is so intimate is very important.”

“We are pleased to have the opportunity to partner with Arkansas State University on this vital program,” said Rebecca Pittillo, the Blue & You Foundation executive director. “A-State’s project is a tangible step in building more equity in the medical field. We should all find hope in programs like this, that are fostering a future where all segments of the population are represented equally in the physicians caring for the state of Arkansas.”

With the grant approved in time to implement for the fall 2021 semester, Boyd and her colleagues set the new program in motion.

“Our initial plan was to do the program with five students each year,” said Boyd. “We did this so the total would be 20 students after the first four years of the program. But we had six outstanding students who applied, so we accepted those six for our first year.” 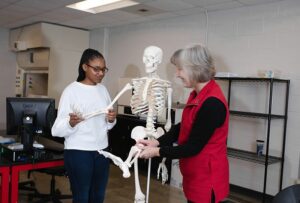 Boyd explained that it is expected for some pre-med undergraduates to drop out of college or move on to a different field of study, but this number is higher with minority students. Under A-State’s program, the selected students receive financial assistance for the academic year. This allows them to focus more fully on their studies instead of diverting their attention to part-time jobs. Minority doctors are brought in to speak to the students and provide real-life role models.

Amari Jackson is a freshman from McGehee, a small town in Southeast Arkansas. The program has allowed her to see what is possible.

“Several of the professionals who have spoken to us have come from backgrounds similar to ours and even attended Arkansas State University,” said Jackson. “It is one thing to have a dream, but it is something different to be put into a situation where you are looking at someone who has done what you have set out to do. This program offers the opportunity for our dreams to become tangible and to help us obtain them.”

“This program allowed me to form great connections with other minority students who are pursuing the same career path as me,” said Williamson. “I have also been exposed to several wonderful resources and people who are here to support me on my journey.”

“I feel very optimistic,” said Boyd. “Everyone who was a mentor [this semester] saw their students had some stumbles, but they are all staying on track for now. We meet with students once a week. It’s not a ton of time, but it’s critical. That little connection helps them stay grounded with what they are trying to do. It lets the student know that while it will take some effort, they can do it.”