The chase was over. The subject cuffed and in custody.

But something wasn’t right.

Officer Darrin Chase of the West Memphis Police Department made his way back to his vehicle, but suddenly, he felt dizzy and sensed he was in trouble.

“I went to put the car in park, but I started touching the radio,” he said.

He called Sgt. Jennifer Jordan for help. Her patrol car sat only about 20 yards away, but before she reached him, Officer Chase’s eyes rolled back. Limpness overtook him. Officer down.

Sgt. Jordan first suspected heat exhaustion, but Officer Chase failed to respond. Was Officer Chase exposed to a drug during the suspect’s arrest for a stolen car? Was it Fentanyl exposure?

Fentanyl, an incredibly potent (even deadly) opioid, can be absorbed through the skin. Law enforcement officers and other first responders risk potentially fatal fentanyl exposure daily.

The kits were supplied to 2,720 Arkansas officers and deputies through $150,000 in grants from Arkansas Blue Cross and Blue Shield’s Blue & You Foundation for a Healthier Arkansas to the University of Arkansas System’s Criminal Justice Institute in Little Rock. 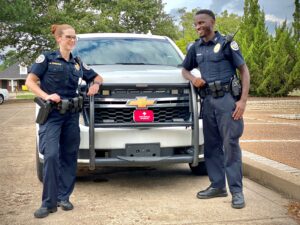 He spent three days in the hospital, including two in the intensive care unit. Doctors later said he would not have survived if he hadn’t quickly received the naloxone.

Naloxone kits often save lives of people experiencing an opioid overdose. This time, though, a kit saved an Arkansas law enforcement officer for the first time.

“I feel like if we had not gotten that grant that put the Narcan kits in our cars, I probably wouldn’t be here today,” Officer Chase said. “I am grateful Sgt. Jordan had the Narcan right there and was able to think on her feet so fast.”

Sgt. Jordan, a shift supervisor, realizes she has an enormous responsibility to keep officers safe.

“To have the ability to save them and get them back to their families is a great feeling,” she said. “I’ve had plenty of scary moments in 11 years of policing, but this one is up there near the top. And honestly, I probably owe the rest of my career to that grant. I really don’t know if I could have come back from losing one of my people like that – right in front of my eyes. I can’t imagine a life in policing without having these tools available.”

In a fitting twist, just a few weeks after returning to duty, Officer Chase used a naloxone kit to revive an overdose victim.