If a “devil’s choice” is a decision between options that are equally bad, then Devil’s Den State Park near West Fork in Northwest Arkansas is the opposite of that and more.

The federal Civilian Conservation Corps (CCC) built the park during the Great Depression. The CCC put more than a million young men to work, planting more than 3 billion trees and constructing trails and shelters in more than 800 parks nationwide, including Devil’s Den. 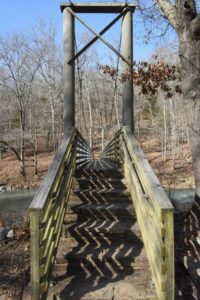 “Devil’s Den is the most preserved CCC camp in Arkansas and one of the best-preserved camps in the U.S.,” said Tim Scott, assistant superintendent of Devil’s Den. “About 65 percent of the park today was built by the CCC.”

A statue commemorates the CCC camp that built the park, but Devil’s Den is much, much more than a historical site. It is a 2,500-acre park with breathtaking views of the Boston Mountains. The park features an 8-acre lake, swimming pool, campsites (modern and primitive), cabins, picnic areas and miles of trails for both hiking and mountain biking.

Hikers can enjoy quality time alone with nature or sign up to hear park interpreters share some of the park’s rich history. Cyclists have access to the oldest continuous mountain bike event in Arkansas, the Ozark Mountain Bike Festival, which celebrates its 30th anniversary this April. And if you’re in the mood or a bite or a beverage, the park’s café is open May 18-Oct. 31. (Café openings may vary during COVID-19.)

It’s your choice. Take your pick: history, nature and/or fitness. They’re all just a day trip away.