Independence County Sheriff Shawn Stephens remembers every life he has saved from an opioid overdose.

The first time was on a man in his 50s who was slurring his words and floating in and out of consciousness because of an opioid overdose. He needed naloxone, a medication that rapidly reverses the effects of opioids.

Thanks to a 2017 grant from the Blue & You Foundation for a Healthier Arkansas, Stephens had a naloxone kit in his vehicle. He already had undergone training at the Criminal Justice Institute (CJI) in Little Rock to learn how to use the kits, so when Stephens saw the man, he knew immediately it was an overdose.

Stephens sprayed one dose of naloxone into the man’s nostril. Naloxone, also known by its brand name Narcan, binds to opioid receptors in the body and can reverse and block the effects of other opioids very quickly.

“Within three minutes, he was coming to, and was awake before the ambulance even arrived,” Stephens said.

The man was taken to the hospital and later to jail to face unrelated criminal charges.

Since then, Stephens has revived three other people from opioid overdoses – a 19-year-old girl who mixed opioids with other drugs, a 20-something woman who took a handful of pills to shock her significant other after an argument and an 18-year-old boy who was pulled over during a routine traffic stop and was overdosing.

“This is an epidemic that crosses across all classes and ages and affects many families,” Stephens said. “Without these kits, it is very likely all of these people would have died.”

So far, hundreds of lives in various Arkansas counties have been saved because first responders now have access to kits. 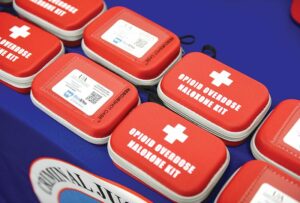 “Thousands of Arkansans have been affected by opioid addiction, but those numbers don’t begin to tell the story of the devastation this crisis has on the lives of real people and real families,” said Curtis Barnett, Arkansas Blue Cross and Blue Shield’s president and chief executive officer.

“At Arkansas Blue Cross, we believe it’s important to connect people to treatment and resources to help fight opioid abuse, and an important part of that work is to make naloxone more accessible,” he said. “The Blue & You Foundation for a Healthier Arkansas is proud to support the University of Arkansas Criminal Justice Institute and state drug director Kirk Lane as we expand the availability of naloxone kits to more of our local law enforcement agencies to help them to continue to save lives.”

Opioid abuse has become a national crisis because of the drugs’ highly addictive qualities.

Pain medications like hydrocodone, OxyContin, morphine are opioids. So are heroin and fentanyl – a synthetic opioid that is 80-100 times stronger than morphine and can kill by simply inhaling a small amount. These drugs can make a person’s brain and body believe the drug is necessary for survival.

Arkansas has the second highest opioid prescription rate in the country; Alabama has the highest. There are 114.6 prescriptions written per 100 people in Arkansas. The national average is 66.5 prescriptions.

Drug overdoses are the leading cause of death for Americans under 50, and opioids account for about 80 percent of those deaths, according to the Centers for Disease Control and Prevention (CDC).

“Thanks to hard work of the first responders trained to use these kits, we are seeing results, not only in lives saved, but many of those saved now are seeking recovery from their addiction,” said Kirk Lane, Arkansas drug director.

But Lane also said to be aware that the opioid crisis is far from over in Arkansas and it is growing more problematic for first responders.

“We have been seeing trends of fentanyl laced k2 or marijuana in some of our analysis,” he said. “Fentanyl is still prevalent in Arkansas.”

Lane said collaborations like that of the Blue & You Foundation and CJI allow more places like libraries and college campuses to have access to naloxone kits. Future plans include to provide kits to school nurses and community corrections officers.

On a recent Friday afternoon, law enforcement officials from across the state gathered at CJI’s office in west Little Rock to discuss the opioid problem and attend training on how to administer naloxone, and hopefully, save more lives.

CJI instructor Terry Fuller helped establish the state’s first naloxone training program in 2015 while working as a detective with the Benton Police Department. He said many people assume most overdoses are from illegal drugs, but that’s often not the case.

Many people who overdose have legitimate prescriptions, but may not take the medicine properly.

“Older people can overdose if they forget whether they have taken a dose and then take an extra one,” Fuller said. “Sometimes, a doctor prescribes an opioid but does not realize it will interact with another drug a person may be taking. You can’t be too careful with these drugs. Ask your doctor and be cautious with them.”

Stephens hasn’t saved an elderly person – yet. But on any given day, Stephens and his deputies patrol the 750-square miles of Independence County. They are always prepared for anything. That’s why kits and proper training, which includes learning how to administer naloxone and how to protect themselves during a rescue, are so important.

“This problem isn’t going away any time soon,” Stephens said. “It’s probably going to get worse before it gets better. The pills are out there, and they are dangerous. Grants like the one from the Blue & You Foundation are important to fighting this problem, which is in every county in Arkansas and every city.”

A version of this story was originally published in the Spring 2019 issue of Blue & You. The Blue & You Foundation continues to support efforts to provide naloxone kits throughout Arkansas.